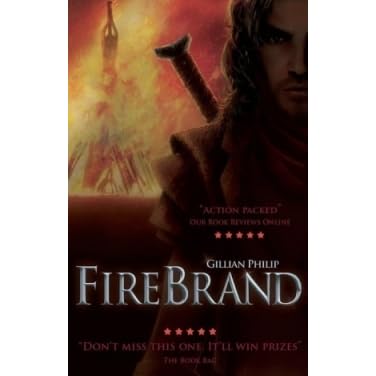 Rory MacGregor, kept a virtual prisoner in his own father's dun and hunted by the Sithe queen, needs a break now and then—and what better fun than tearing the Veil no one else can tear and escaping to the Otherworld? In that dangerous Otherworld, Hannah Falconer is as trapped by circumstance as the strange wild Sithe boy whose horse nearly kills her. When Rory tricks her into crossing the Veil and entering his world, she's sure it can't be any worse than her usual home life. Meanwhile, Seth MacGregor is fighting to keep his clan safe from the malevolent queen Kate.

When an attack comes after years of stalemate, he is shocked to discover who is leading it Wolfsbane, the third novel in Gillian Philip's Rebel Angels series is enthralling and suspenseful, with a range of characters appealing to every age. This year it's Gillian Philip's Firebrand A fantastically violent, utterly thrilling tale Firebrand is one of the very best Seth - a young outcast in McGregor's clan gets stuck in the middle of the political intrigues because of his love for his older half-brother, Conal, a chief of McGregor clan, and goes into exile with him when Conal displeases the queen.

They turn up in Scotland of 16th century right in the middle of rising witch hunts and experience a horrible atmosphere of suspicion and paranoia, ignorance, church overwhelming power, betrayal and shocking violence. The characters is what really makes this book into something special. They are so alive, they literally jump off the page. Seth, Conal, Kate, Catriona and even old Ma Sinclair, - they are wonderfully done and very memorable, hence I recommend this book to any fan of realistic fantasy. The ending of the book is extremely exciting, nerve-wracking and heroic.

I know I'll be reading the other 2 books in this trilogy very soon!

It made it seem older, somehow, and like it had gone through trials of its own. After reading the author's note and realizing how much trouble he had with Seth, I found myself endeared to him. I enjoy when writers treat their characters as real people and I can see, after reading Firebrand, why Seth might have been a difficult character. There were times when his behavior irritated me, as he isn't all that bright and his tongue was apt to get him into trouble. Still, his undying loyalty was very touching.

This book reminded me a lot of the Royal Assassin series by Robin Hobb. I think it was a combination of past and present, with the narrator reflecting on what has happened and what is it to come. Also, the main character's affinity with his wolf and his status as a bastard outsider reminded me a lot of Fitz. I miss you, Fitz! I had a hard time putting this book down. I also had a hard time finishing, because I didn't want it to end.

The Story of Lucifer's Fall - Before The Book of Genesis.

I'm glad I picked it up. Only his older half-brother, Conal, cared for him in his youth. So when Conal is exiled to the mortal realms by Kate, the Sithe queen, Seth travels with him. But life in the late 16th century is hard, especially when they're obvious targets for the witch craze. This is the first part of Seth's tale.

I'm not a fan of character driven novels, but there are exceptions to every rule. And boy, is this an exception. Seth's angry youth and damaged pride grabbed my interest and never let it go. This isn't an angsty story and Seth does grow up, but he only learns there are more things in the world that deserve his anger and that love brings its own kinds of pain. As a narrator, Seth constantly alludes to future happenings, meaning that even when things are going well for him in the book - as rare as that is - it won't last. Indeed, the tension caused by knowing things will get worse is partly why this book was so compelling.

It's also what makes the ending so forceful. I was surprised that Kate, a queen who ruled by consent, was able to keep power considering as readers we only hear of the cruel things she does.

I found this a flaw in the worldbuiding, that we're so focused on Seth's family's dun holding that there's no sense of a larger world on their side of the veil. It also took me longer than I'd care to admit to figure out that the Sithe switched terms with humans, calling themselves human beings, us the full-mortals and stories about us 'fairy stories'. At first I thought the fairy story reference was an error. This swapping of terms could have been made clearer, though Philip did do a great job of explaining other aspects of Sithe culture through realistic circumstances.

I loved the inclusion of truenames and water-horses, and the Lammyr were a creepy invention. There was also a great conversation half way through the book between Seth and one of his lovers about some differences between Sithe and mortal customs with regards to women. And I loved that the Sithe were an equal society, with no bias with regards to lovers, though also little love for offspring.

I don't always mention this but there are 2 rapes that occur in the book. One is off stage and neither is described in any detail. I appreciated the care given one of the characters with regards to healing and finding love despite the reality of the horrors of the world. Ultimately it's a great book that's hard to put down, though it won't leave you feeling warm and fuzzy at the end.

Strider66 Feb 5, What I'm realizing lately is that I have different requirements for fantasy than for most other genres, particularly fantasy of a more classic, epic vein. Where I don't mind essentially plotless books in realistic fiction or science fiction, characters drifting and just living out their lives, it really doesn't work for me in fantasy.

Now, I don't mean that nothing happens in Firebrand; in fact, a lot happens, much of it exciting, but there's no driving, overarching plot. When I read fantasy, I want there to be a clear goal from the outset, whether it be a quest or a villain to defeat or whatever. Firebrand does not follow this style and, thus, I enjoyed it less than I'd hoped, though it's a well done novel.

Since the hero is 16, Firebrand has been getting some attention as possibly being YA, though its imprint is not. Though Seth is 16 through most of it, the story is told like he's an old man looking back on his life. This removes some of the immediacy and means that he comes off more like a grownup than a teen. He occasionally reflects on things he would have done differently had he known then what he knows now, making sure the reader remembers this. I really wouldn't call Firebrand YA. The world itself is very cool. There's a sort of parallel universe vibe.

Basically, Seth and his people live in one world and beyond the Veil lies another, the land of the full-mortals, our distant, unwashed ancestors. They can pass between the Veil, but they are persecuted for witchcraft there, not being normal by full-mortal standards. I love stories about a world of magic hidden within the ordinary one, and I love how it ties into history here.

Seth and his half-brother, Conal, have an interesting relationship. Seth, not by nature especially trusting, assumes that his brother will want his death, but Conal is actually the sweetest guy, and essentially raises Seth. Their love for one another, even when they very much do not agree on important matters is touching, and not the sort of relationship I've seen much of in fiction. None of the other connections rang as true or mattered as much as this one. Seth does fall in love, but he would still choose his brother over his woman any day. One thing I do need to mention about the romantic relationships is that I like that Philip didn't use a cop-out.

The Sithe can essentially live forever, so long as they don't get killed or at least so long that it feels like forever compared to our lifespans. The full-mortals have lifespans of 16th century humans, so not long. One of the Sithe falls in love with a human, and I love that Philip didn't come up with some loophole that would let their love last forever. If action-based fantasy is your thing, there's a good bit of sword play and fighting. As I said, there's a lot that happens, but I just couldn't get especially caught up in the story, a combination of the lack of driving plot and the storytelling method, which means you know Seth will survive ultimately.

I was, however, entertained and I didn't have to struggle through the pages. 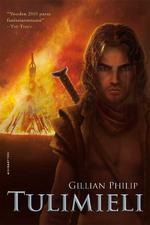